During the tensile process of the sample, after the material enters the strengthening stage after the yield stage, the maximum force (Fb) that the material undergoes when it breaks is significantly reduced with the size of the transverse section, divided by the original cross-sectional area (So) of the sample. The stress (σ) is called tensile strength or strength limit (σb) and the unit is N/(MPa). It represents the greatest ability of metal materials to resist damage under the action of tensile forces.

Where: Fb - the maximum force sustained when the specimen is broken, N (Newtons); So - the original cross-sectional area of the specimen, mm2.

Tensile strength (Rm) refers to the material subjected to maximum stress before breaking. When the steel yields to a certain degree, its resistance to deformation is increased again due to the rearrangement of the internal grains. At this time, although the deformation develops rapidly, it can only increase with the increase of the stress until the stress reaches a maximum value. Since then, the ability of steel to resist deformation has been significantly reduced, and a large plastic deformation has occurred at the weakest point. Here, the cross-section of the specimen rapidly shrinks, and necking occurs until it breaks. The maximum stress value before the steel is broken and broken is called the strength limit or the tensile strength.

The common method for measuring the tensile strength in China is to use a universal material testing machine to measure the tensile/compressive strength of the material.

For brittle materials and non-formed necked plastic materials, the highest tensile load is the breaking load, so its tensile strength also represents fracture resistance. For a necked plastic material, its tensile strength represents the resistance to maximum uniform deformation, and also indicates the ultimate load carrying capacity of the material under static tension conditions. For steel wire ropes and other parts, tensile strength is a more meaningful performance indicator. Tensile strength is easily measured, and its reproducibility is good. It has a certain relationship with other mechanical properties such as fatigue limit and hardness. Therefore, it is also used as one of the general mechanical properties of materials to evaluate product quality and process specifications.

Necking is a special phenomenon in which the deformation of a ductile metal material concentrates on a local area during a tensile test.

It is the result of a combination of strain hardening (physical factors) and cross-sectional reduction (geometric factors). The plastic deformation is uniform before the maximum point b of the tensile force-elongation (extension) curve of the metal specimen, because the strain hardening of the material increases the bearing capacity of the specimen and can compensate for the bearing capacity of the specimen due to the reduction of the cross section of the specimen. decline. After point b, because the strain hardening does not keep up with the development of plastic deformation, the deformation concentrates on the local area of the sample to cause necking. Df>0 before point m; df<0 after point b. b is the maximum force point, also the starting point of local plastic deformation, also known as the tensile instability point or plastic instability point.

The practical significance of tensile strength

1) σb marks the actual bearing capacity of ductile metal materials, but this bearing capacity is limited to the uniaxially loaded condition of smooth specimens, and the σb of ductile materials cannot be used as a design parameter because the strain corresponding to σb is far from being actually used. What we want to achieve in If the material is subjected to a complex stress state, σb does not represent the actual useful strength of the material. Since σb represents the maximum bearing capacity of the actual machine under static tension conditions, and σb is easy to measure and has good reproducibility, it is one of the important mechanical properties of engineering metal materials. It is widely used as a product specification or quality control  index.

2) For brittle metallic materials, once the tensile force reaches its maximum value, the material will break rapidly, so σb is the fracture strength of the brittle material. For product design, the allowable stress is based on σb.

4) There is a certain empirical relationship between tensile strength σb and Brinell hardness HBW and fatigue limit.

The ratio of the maximum load that the film can withstand under the action of pure tensile force without breaking, to the width of the stretched film, is usually expressed in N/3 cm. It is divided into warp and weft tensile strength.

Weft Tensile Strength: Tensile strength when stretched in the direction of the weft of the film.

The tensile strength of a rock is the maximum tensile force per unit area that a rock specimen can withstand when it is subjected to axial tensile stress. 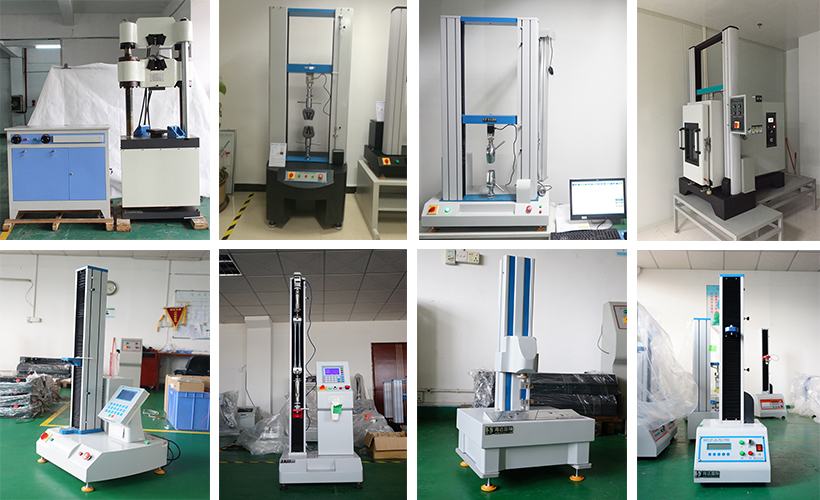 Haida Internatioal Equipment,the manufacturer of tensile testing machine for 13 years,we have the professional technical team and R&D department,we can provide test machine and lab testing solution,you can contact us anytime when you want.